Harry Bradford is a London-based conductor currently completing a Master’s degree at the Royal Academy of Music under Patrick Russill. 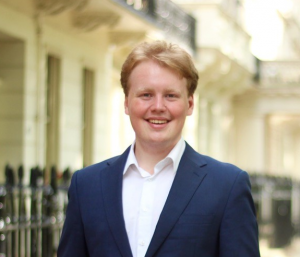 Alongside his commitments at the Academy, Harry is the Genesis Sixteen Conducting Scholar 2018-19 receiving mentoring from Harry Christophers and Eamonn Dougan, the Alec Robertson Scholar at Westminster Cathedral, Musical Director of Ingatestone Choral Society and Principal Conductor of the Children’s International Voices of Enfield. Previously, Harry read music at the University of Cambridge and was a choral scholar in the choir of King’s College under the direction of Stephen Cleobury.

At King’s, Harry featured as a soloist on live BBC Radio and television broadcasts and was also musical director of the scholars’ close harmony group, ‘The King’s Men’. Harry remains active as a singer; working with Tenebrae, Mogens Dahl Kammerkoor, the Hanover Band Chorus and Siglo de Oro as well as being a regular deputy in a number of London’s professional church choirs.

Recent career highlights include winning 3rd prize at the DIMA international competition in Cluj, Romania and becoming musical director of Recordare, a new London-based chamber choir consisting of Genesis Sixteen alumni. Harry is grateful to the Royal Academy of Music Bursary Fund, the Chizel Educational Trust, The Royal College of Organists and the Cherubim Music Trust for their support.